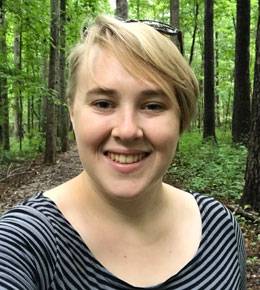 As a young woman starting her design career (who also wanted flexibility and no cubicle!), Wild Web Women® was the perfect fit. Joining a great bunch of women (and one man) helping other women make a difference was a no-brainer. With a degree in Graphic Design, Cinder brings another element of design and creativity to the Wild Web Women® team.

Cinder has a unique name that she loves. The story behind her name, something most people would never guess, was that she was named after a type of volcano called a Cinder Cone. Like a volcano Cinder’s creativity bursts. She also appreciates the freedom of working in a digital workplace.

Being behind the computer isn’t all that Cinder does. Cinder has a enthusiastic love for adventures and the outdoors, which probably came from her outdoorsy family. She tries to make it a point to go out and explore as often as she can. She truly believes that even if an adventure doesn’t go smoothly, at least there will be a good story behind it. Some of her favorite places to visit are the Eastern Sierras, any National Park in Utah, and Lake Powell.